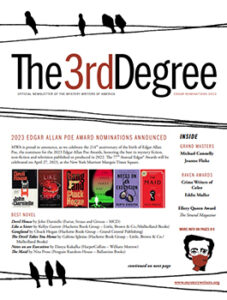 The 77th Annual Edgar® Awards will be celebrated on April 27, 2023, at the New York Marriott
Marquis Times Square. Learn more about special hotel pricing and the Banquet location.

MWA Announces 2023 Grand Master, Raven and Ellery Queen Award Recipients
Mystery Writers of America (MWA) has announced the recipients of its special awards. The board chose Michael Connelly and Joanne Fluke as the 2023 Grand Masters, the 2023 Raven Award recipients are Crime Writers of Color and Eddie Muller, and The Strand Magazine will receive the Ellery Queen Award. Read more…

Nominees for the best of the best in mystery fiction, non-fiction and television published or produced in 2021 were announced on January 19, 2022, as we celebrated the 213th anniversary of the birth of Edgar Allan Poe. The Grand Master, Raven and Ellery Queen Awards were announced 1/12/22.

The Edgar® Awards are judged by volunteer committees of professional writers, who dedicate many hours to the process. These peer awards are given by Mystery Writers of America.

View the Edgar® Nominees by Categories 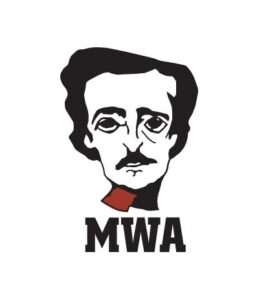